As an accompaniment to their debut Stay EP, Los Angeles based trio Tiny Hearts released a music video for “Snow Cold” via Vice HERE.

Dede from Tiny Hearts had this to say about it: “The video documents a journey of a character from the depths of an underground garage to the edge of civilization. The dreamlike bokeh offers a study in binary sequence as the simple code and structure of a technologically advanced society. Lights blink off and on, smeared and unfocused, bubbling and reflecting the buzzing analog synthesis of the music.”

And Vice described their music “…singer Dede applies her glacially seductive tones to the hypnotic, synth-stuttered, Moroder-esque single “Snow Cold””. Earlier, the trio performed and previewed the Stay EP in an invite only Boiler Room session at LA’s HVW8 gallery.

The comrades of Tiny Hearts (Waajeed, Dede Reynolds, Tim K) met at a bar beneath the J train in New York City. Cadillac margaritas and invisible hands pushed the three to a southside basement for a late night listening session. Resulting remixes led to original mixes, and the group was formed. The result: a reflection of intention.

Waajeed, a founding member of Detroit’s Slum Village and Platinum Pied Pipers, was in a period of deep introspection when he met Brooklyn duo DEDE (Dede Reynolds and Tim K). As a key figure in the collaboration, he shapes the sonic palette now known as Tiny Hearts. Tim K is a jazz-trained producer and composer bringing a unique melodic sensibility and lyrical identity to the Hearts. He is the glue of the trio. Dede Reynolds, a nomadic chanteuse, contributes her icy pure vocal texture, creating the stark contrast to Waajeed’s gritty tracks that defines the sound. Her love of French pop, vintage fashion and Italian horror shapes the auditory and visual representation of the band.

The group debuted on the DIRT TECH RECK takeover on Benji B’s BBC radio show in late 2012. Circulation and word of mouth created a buzz, resulting in support from KCRW’s Garth Trinidad, Aaron Byrd and Anthony Valadez, KEXP’s DJ Alex, as well as other radio and club DJs across the globe. Tiny Hearts were then featured as essential emerging artists in KCRW, NPR, and LA Canvas.

Stay, the first EP from Tiny Hearts, is the result of two years of trans-continental collaboration, studio incubation, and friendship. The four-song debut is as hard as it is soft, as Detroit as it is L.A., equally well suited for seriously getting down or not-so-seriously kicking back with a glass of something. 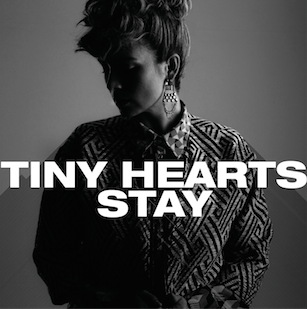