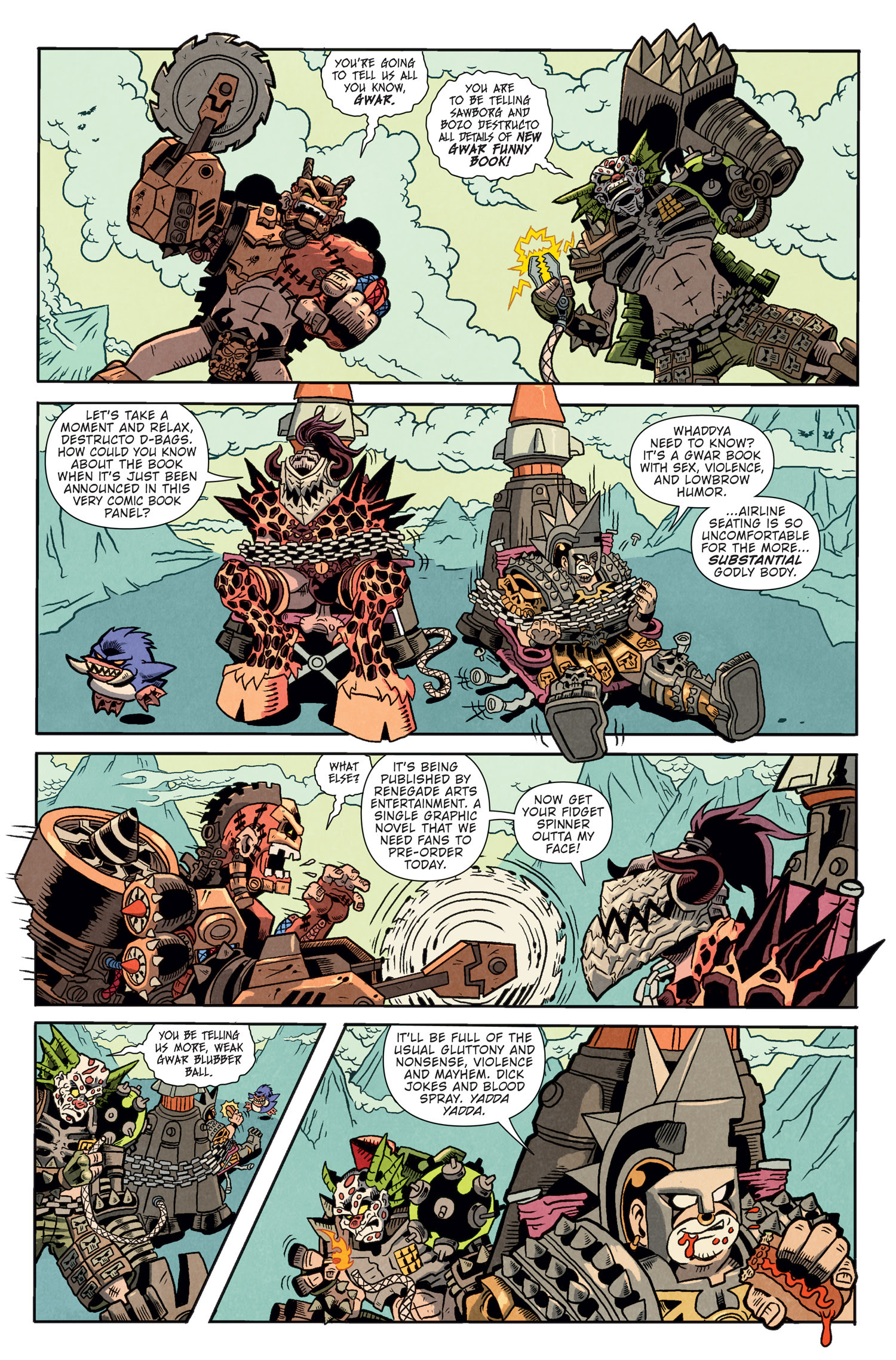 You know their name, you know their music but do you know their story? Everyone’s favorite blood spewing alien band return to comics in an all-new 96-page graphic novel.
The Master is at it again in a fierce battle against Cardinal Syn. To get into the Master’s good graces, the Destructo brothers have trapped GWAR in order to interrogate them to find the key to destroying Cardinal Syn once and for all. Will Sawborg and Bozo Destructo get the answers they need? Can GWAR escape their clutches? Will Cardinal Syn destroy them all? And what really happened when GWAR were banished to earth?
All will be revealed in GWAR: The Enormogantic Fail, a new 96 page graphic novel from GWAR and Renegade Arts Entertainment. Written by Matt Maguire (GWAR) and Matt Miner (Critical Hit, Toe Tag Riot), with art by some of the greatest comic creators this side of Flab Quarv 7, hand-picked by GWAR themselves.
Available for pre-order now along with exclusive prints, pins, CDs, signed goods and even unique stage props. Pre-orders will be delivered June 2019.
Now, go to GWARCOMIC.COM and get your pre-order in to make sure you get the exclusives before they run out.
Quotes:
Sawborg Destructo, GWAR: ‘The time has come once again, human filth, to show your Lords and Masters your undying, but most likely dying devotion! I Sawborg Destructo commands you to get your pre-orders in now for GWAR’s new comic The Enormogantic Fail! That’s right, get your preorder in today and maybe you’ll survive long enough to read it.’
Matt Miner, writer: ‘Well it looks like I’m not quite done with GWAR yet, and I’ll be hanging out with that crew long enough for some more dick jokes and blood spray.  Always a good time when I can hide from the world in piles of bodies, covered in spew.’
Alexander Finbow, Publisher: ‘The opportunity to work with GWAR on this new graphic novel gave us the chance to help create a great story in a collaborative process that respects the band, creators and GWAR fans. The first GWAR comic series was successfully funded through Kickstarter, but the team was keen to try out a different approach this time, one that tied in with some ideas we’d also wanted to try. That’s why we created the gwarcomic.com website, a place where GWAR fans can find out easily what the book is all about, and decide whether they want to sign up for the ride.’
Writers: Matt Maguire And Matt Miner
Artists: Matt Maguire, Liana Kangas, Lukasz Kowalczuk, Matt Lejeune, Katie Longua, Jeff Martin, Kelly Williams
Colour Artist: Josh Jensen
Cover Artists: Jonathan Brandon Sawyer And Josh Jensen
Letters: Taylor Esposito  Editor: Brendan Wright  Publisher: Alexander Finbow
● GWAR is a Grammy-nominated, American rock band known for theatrical live shows. Their latest album, “The Blood of Gods” is nothing less than a sacred text chronicling the rise of humanity against their makers, and the massive battle between GWAR and the forces of all that is uptight and wrong with the world. Along the way, the band challenges the sins of their great mistake, from politics, pollution, and organized religion, to fast food, and factory farming. Humans are shown as what they are; a parasitic disease that must be eradicated before they suck the planet dry. Born of adversity, “The Blood of Gods” is a sonic scar…a question asked and answered…  More information at www.gwar.net/