Available On Tour-Only Split 7″ With The Orwells

To Play Festivals Including Austin City Limits and Bumbershoot

Just a few short days after releasing their outrageously NSFW “Cocaine” video, FIDLAR return with more. “Awkward” is the first new music to properly surface since the release of the LA garage rockers’ self-titled debut this January. Recorded with Rob Schnapf at MANT Studio in LA earlier this summer, the track is the type of uproarious, profane anthem only FIDLAR are capable of writing. “Awkward” is available to stream now, and will be available for purchase in the US iTunes store tomorrow.

In other news, FIDLAR hits the road with Chicago skuzzballs The Orwells this fall. A tour-only, split 7″ will commemorate the run. “Awkward” will comprise one side, while The Orwells’ new “Always N Forever” will comprise the other. Check out the dates below.

“And as they like to remind you in interviews and at their live shows, FIDLAR is an acronym for “fuck it, dog, life’s a risk.” That said, across these 39 minutes, they also make life sound like a lot of fun.” – Pitchfork

“On their self-titled debut, the fierce LA band blends messy house-[arty punk with fuzzy surf vibes and comes off like the Pixies if they wore lamp shades on their heads.” – Entertainment Weekly

“Punk’s not dead! And FIDLAR are here from Los Angeles to prove it with three-chord thrashes that summon the spirit of 77” – Guardian

“This doped-up, hard-partying Los Angeles four-piece are set to be the most exciting punk band of 2013.” – NME

“FIDLAR isn’t just another California punk band churning out hard-driving rock (although tracks like “Cheap Beer” certainly live up that expectation); rather they infuse their songs—like the stand-out “Gimme Something”—with a subtly sunny pop vibe that shows off their LA roots” – TIME Magazine

“Carper and his bandmates may in fact be incorrigible do-nothings, but they’ve got something to show for it: an ever-growing catalog of readymade garage-punk classics that draw omnivorously on a half century of bad-ass pop, from Phil Spector to Nirvana to the late, great Jay Reatard.” – Noisey

“FIDLAR channel elements of classic acts like the White Stripes and Pixies, while practically begging for a co-headlining tour with contemporaries like Bass Drum of Death and JEFF the Brotherhood” –SPIN

“The tune can be summed up in a handful of image descriptions; sandboarding, grim reaper, suicidal flip-up hat, skull mask, and shred.” – Filter Magazine

“Thanks for coming, man. Want some bum juice?”
“What the fuck is in this shit?”
“Tampico and Everclear. It’s pretty gross.”

When they started in 2009, seeing FIDLAR meant showing up to a house party and eventually having this exchange with one of them. Zac Carper, The bands guitarist and singer (well, one of ’em) would hand you a red cup , throw an arm around your neck and probably end up blurting out how fucked up he was. Their set list would read more like a grocery list of party supplies than a list of songs: “Cocaine. Cheap Beer. Chinese weed. Four Loko.”

After a few years of being a band Zac still plugs in his pedals attached to a skate deck (“Pedal board”, get it?) and says “Hi We’re FIDLAR: F-I-D-L-A-R. It means ‘Fuck It Dog, Life’s a Risk”.  Seeing a FIDLAR set consists of drinking and dancing with people that are twice as drunk as you are while the band rips through songs about what they know best: The girl doesn’t call, my ex is a whore, I lost my phone, my car is a piece of shit, my friends are pieces of shit, I do too many drugs, I’m really awkward, I love Del Taco.

FIDLAR is Zac Carper, Elvis Kuehn,  Brandon Schwartzel, and Max Kuehn.   Elvis and Zac met at Kingsize Soundlabs in LA and recorded a ton of demos with the band before playing a live show.  Their first show was on a FMLY bike ride at a skatepark in Culver City. Three years later the band has played with Black Lips, OFF!, Japanther and toured with The Hives.  They’ve released two EP’s and just got back from touring Europe.

Listening to them, you can tell that the band did their homework on punk rock and seem dead set on inflicting lessons on anyone willing to listen.  Any given song will give you a Germs influenced guitar solo, the catchy “Ooo’s” and “Ah’s” of The Misfits , and lyrics in the same family as Black Flag’s “Six Pack” and “TV Party” . On the same token they can just as easily be compared to any of the bands they cover (Blink 182, FEAR, CCR, Warron Zevon), yet it all comes across entirely their own: Surfier, Faster, more fuzzed out, more personal and a lot more drunk.

FIDLAR are your dumbass friends that find a beer, scrape the shit off their shoes, and tell you how the hardest thing about waking up late and trying not to fuck up your life is having to do it with no job, no money and everyone bumming your cigarettes.

Click here To Watch “Cocaine” Video On Funny or Die 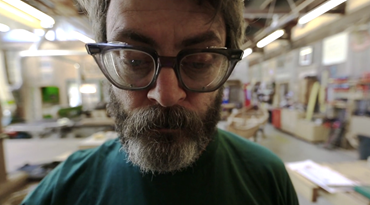