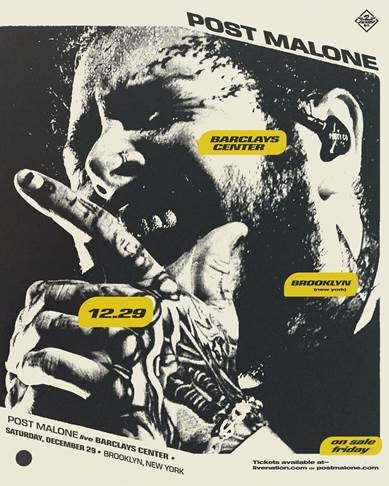 Tickets to the show, which is produced by Live Nation, go on sale Friday, Sept. 21 at 10 a.m.
and can be purchased online at www.ticketmaster.com, or by phone at 800-745-3000. Tickets can also be purchased at the American Express Box Office starting Saturday, Sept. 22 at noon. American Express® Card Members can purchase tickets before the general public beginning Tuesday, September 18 at 10am EDT through Thursday, September 20 at 10pm EDT.

Malone skyrocketed to fame after the release of his 2015 viral hit, “White Iverson.” The single which is RIAA 5X Platinum was followed by his first studio album, Stoney, released in December 2016, which has since been certified triple platinum by the RIAA.  In August, Stoney appeared for its 77th week on Billboard’s Top R&B and Hip-Hop Albums chart, breaking Michael Jackson’s 34-year-old record for the 76 weeks that Thriller spent on the chart. To date, Post Malone currently has two of the top 10 best-selling Hip-Hop album of 2018, Beerbongs & Bentleys & Stoney.

With a focus on emerging businesses, BSE identifies and creates alliances, strategic partnerships and other business opportunities to ensure the success of its assets.

ABOUT POST MALONE:
Post Malone stirs a mix of genres into his own sonic sound that’s both intoxicating and invigorating. His RIAA Platinum certified debut album, Stoney, led the genre-bending Dallas, TX artist to his first Top 10 Billboard 200 and first #1 R&B/Hip-Hop Album while being the “#1 Debut Hip-Hop Artist of 2016”. In 2018, his sophomore album, beerbongs & bentleys, debuted on the Billboard Top 200 at #1 and achieved one the year’s “biggest streaming weeks ever”. Additionally, Post charted nine songs in the Top 20 of the Hot 100, notching “the most songs in the Top 20 of the Hot 100.” Moreover, he also smashed the record for most simultaneous Top 40 Hot 100 hits with 14. As beerbongs & bentleys returned to #1 for the second consecutive week on the Top 200, his domination shows no sign of slowing down.