Skip to content
New Album “The Blood of Gods” Out October 20th via Metal Blade Records
On October 20th, GWAR will release a new studio album entitled “The Blood of Gods” via Metal Blade Records.  In support of the new album, your Lords and Masters will leave their arctic slumber and return to the road to cause aural (and anal) devastation across North America.  Joining in the chaos will be Ghoul, Doyle (10/20-11/5), He Is Legend (11/7-12/10) and U.S. Bastards.  The tour kicks off in Richmond, VA on October 20th and runs through December 10th in Detroit, MI.  The tour includes a stop in New York City on Halloween as well!  A complete list of dates can be found below.
The Berserker Blothar had this to say about the upcoming tour:
“Humans, we are coming to tear your world apart with a live performance the likes of which has never been seen on this or any other planet! This album, “The Blood of Gods,” is the greatest thing since French toast.  Just hearing these songs performed will result in an instant paroxysm of weeping, gnashing of teeth, and the uncontrollable voiding of your filthy bowels. Now, we are taking the whole bloody shit show on the road, with the most spectacular, blood-drenched, gruesome, and terrifying rock concert of all time. Don’t miss your chance to sacrifice yourself to GWAR at a venue near you!”
Bohabs! Be the coolest corpse in the pile! Don’t miss your chance to pledge your allegiance to GWAR each night when they rape and pillage your town. Head to https://www.gwarvip.com to take part in “The Lords and Masters VIP Experience”.
General admission tickets and VIP Packages go on sale to the public this Friday August 18th at 10:00 AM Eastern.
The Lords and Masters VIP Experience Includes:
*One (1) General Admission Ticket with Venue Early Entry (potentially guest list)
*Exclusive access to GWAR soundcheck where you will pledge allegiance to your Lords & Masters!
*Invitation to play a GWAR instrument onstage at soundcheck
*Tour of the weapons of your Lords & Masters
*Crowd Free Merch Access
*One (1) Souvenir item signed by members of GWAR
*One (1)  Souvenir GWAR laminate
*Photo opportunity with GWAR before the show
*You will be killed by GWAR on stage during the show.
*Designated Slave Pit Area to pledge your allegiance before you are killed on stage by GWAR!
There are only 5 VIP TICKETS available per show, that’s it so don’t wait.
Concerning the album;  “The Blood of Gods” is nothing less than a sacred text chronicling the rise of humanity against their makers, and the massive battle between GWAR and the forces of all that is uptight and wrong with the world. Along the way, the band challenges the sins of their great mistake, from politics, pollution, and organized religion, to fast food, and factory farming. Humans are shown as what they are; a parasitic disease that must be eradicated before they suck the planet dry. Meanwhile, Sleazy P. Martini, the crooked entrepreneur who discovered the Scumdogs, and has always envisioned them as a sort of horrific boy band, finally managed to convince the group to write a hit song called “I’ll Be Your Monster.” If all goes according to plan, it may be just stupid enough to work!
GWAR LIVES MOTHERFUCKERS!
GWAR:
9/15: Knoxville, TN @ The International
9/16: Middletown, OH @ Land of Illusion
9/17: Chicago, IL @ Riot Fest
GWAR W/Ghoul, Doyle and U.S. Bastards: 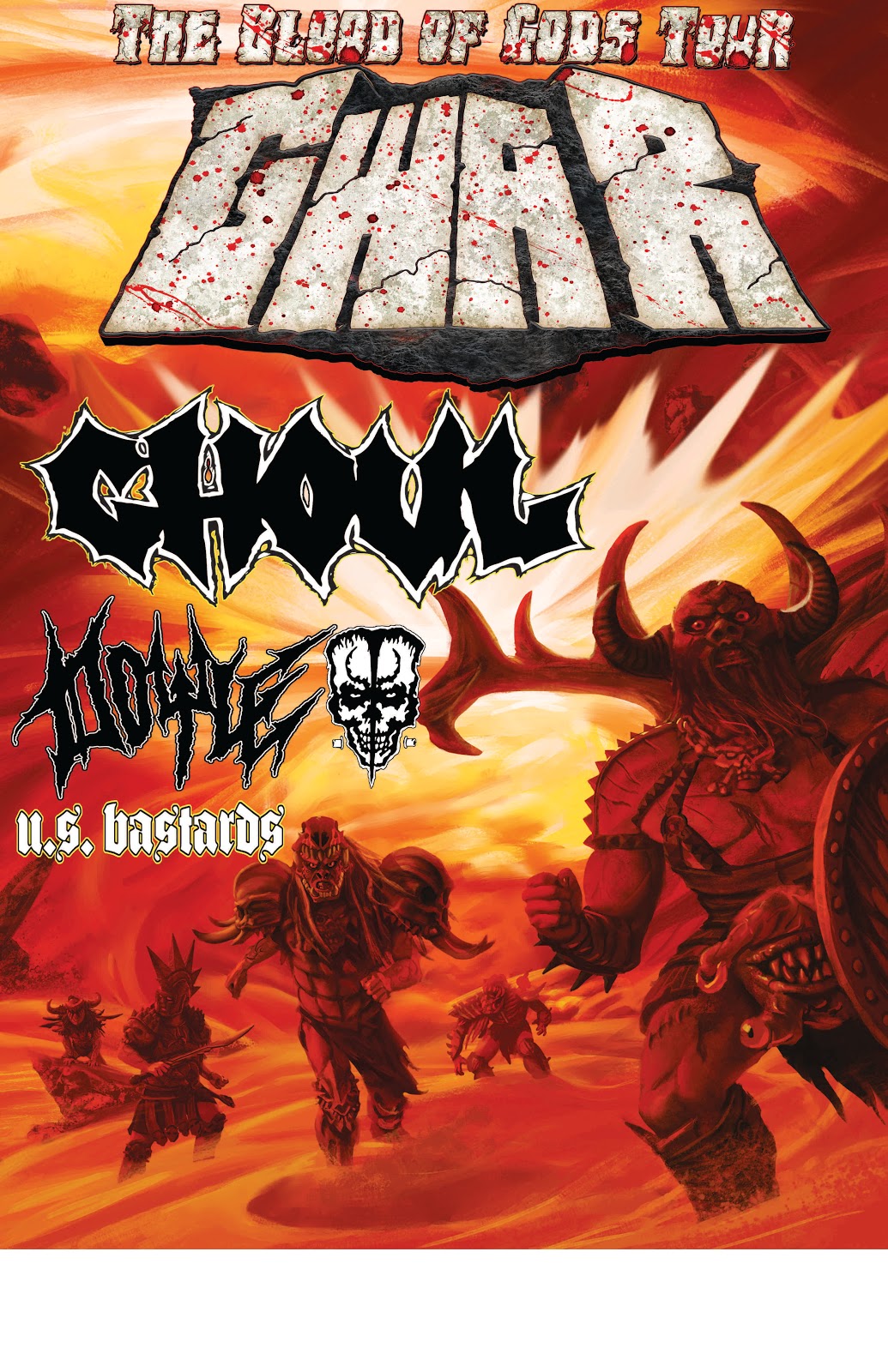 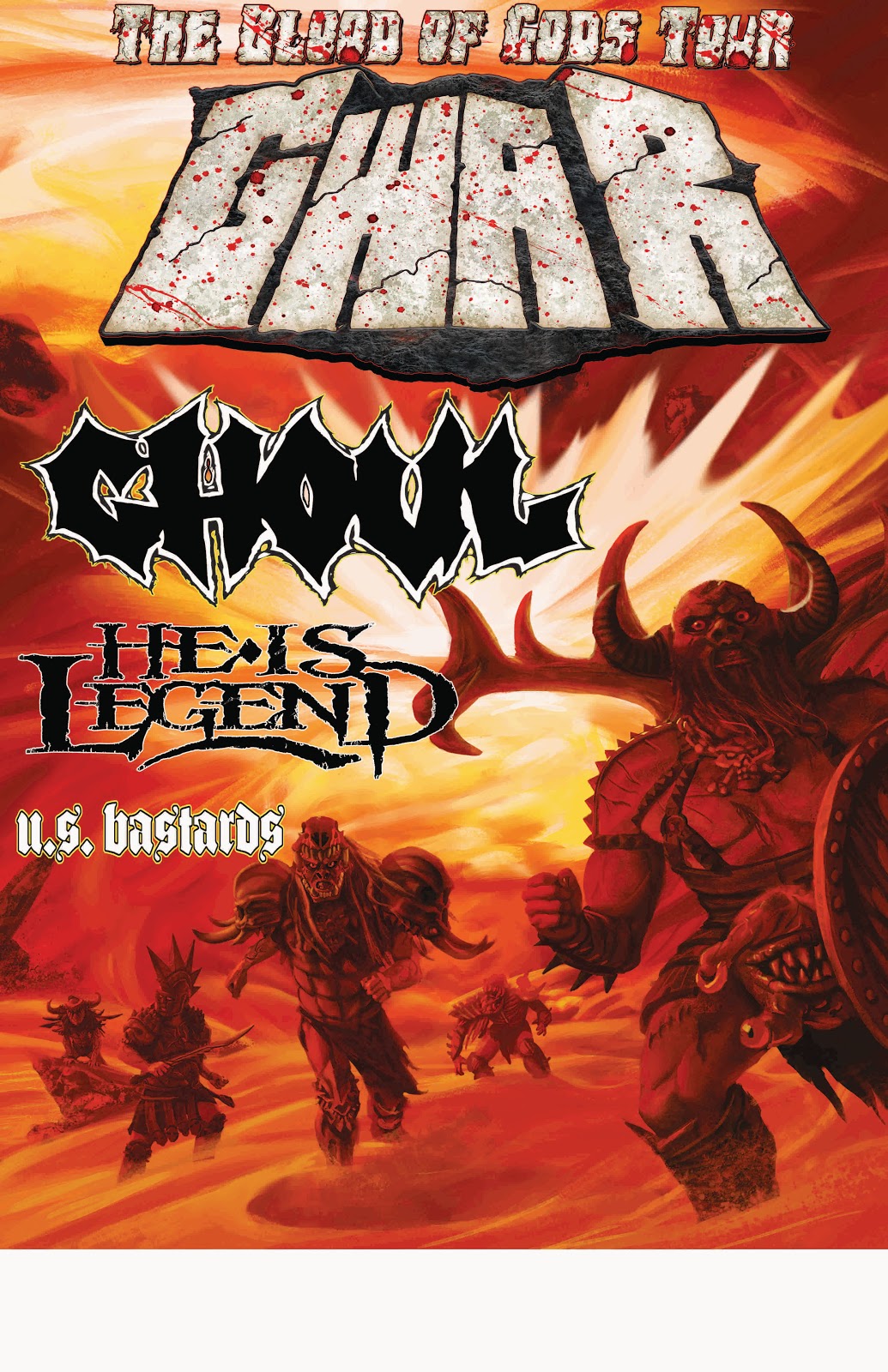