Click Here To Listen To “Arizona Bay” On Rolling Stone

‘Top Of The Pops’ Tracklisting 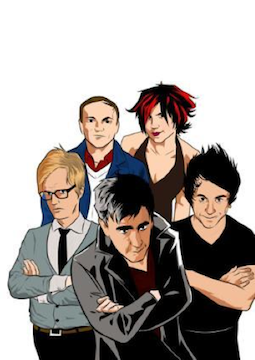 Art Brut have been called many things over the course of our career, not all of them polite. The thing we get called most often is an ‘art band’, which I accept is totally our fault for putting the word Art in our name. However, Art Brut have never seen ourselves as an art band, we have been adamant since we began that we are, in fact, a classic rock band.

Unfortunately, it is impossible to begin your career as a classic rock band, no matter how often you persist in referring to yourself as one.

Over the last ten years, however, Art Brut have been tirelessly working towards the moment we could finally call ourselves a classic rock band and know in our heart of hearts that it was true. Our mission is finally complete.

–  We have been on the front cover of German Rolling Stone.

– Posed naked in the NME.

– Had our lyrics be the subject of lectures at a Berlin university.

– Released four albums over the period of ten years (the last two produced by the legendary Black Francis from the Pixies).

– And finally we are held in universal regard by both our peers and the general public.

(Actually, with that last one I’ve never checked with our peers and have very little to do with the general public but am fairly certain that is the case).

So, to celebrate our new status as a CLASSIC ROCK BAND we have decided to release a Best Of Compilation.

It is called ‘Art Brut; Top Of The Pops’ and is a double album (or if you are downloading it, a lot of songs).

CD1 contains the best and most popular songs from our career in chronological order. So you can see clearly that we have followed the CLASSIC ROCK blueprint exactly –

CD2 contains rare songs that Freddy Feedback rescued from our vaults including live songs, covers we finally got round to asking for permission to release, hard to acquire b-sides and unreleased demos from our recording sessions for ‘Its A Bit Complicated’ that took place with Pulp’s Russel Senior (who is not mad, I promise).

As a treat to ourselves we commissioned one of our favourite artists Michael Riedel to do the art work for us.

We will be playing live to celebrate our new status and will announce the details soon…..

We look forward to seeing you all there.

Next phase is HERITAGE ROCK BAND, see you in another 10 years for the Second Volume.