A rock & roll band with an enduring fondness for pure pop and a wicked, sly sense of humor, Dead Boots(f/k/a TAB the Band) defy easy categorization. They love The Beatles and Cheap Trick as much as T-Rex and The Rolling Stones, yet as much as Dead Boots draw on classic rock influences, they are a vibrant, contemporary band that blends the vigor ofpunk, the might of arena rock and the melodicism ofpower-pop, earning the admiration of Isaac Brockof Modest Mouse, Perry Farrell of Jane’s Addiction and J Mascis of Dinosaur Jr, alt-rock stalwarts who requested the band as their opening act.

Dead Boots may be the best example of how great things can come from no expectations. Brothers Adrian and Tony Perry began the group almost as a lark. “I grew up in LA,” explains Adrian, “and whenever I came to visit Tony, we’d always record stuff for fun.” Adrian had a few serious bands while he was in high school and college, continuing to occasionally play with Tony. “A few years ago we said, let’s mess around and record some songs,” remembers Adrian. “Tony invited his friend Ben Tileston to have real drum tracks. We ended up writing nine songs in a week — it was very organic. Before we knew it, we had a show booked.”

Since then, the band has toured extensively in the US, Canada and UK, supporting acts such as Stone Temple Pilots, Cage the Elephant, Black Rebel Motorcycle Club, and Slash. The band has also played major US and UK festivals such as Lollapalooza, the Hyde Park Calling Festival,Download Festival, Mountain Jam, CMJ and SXSW and headlined John Varvatos Thursday Night Live at 315 Bowery.

“We started almost like a punk band,” explains Adrian. “We focused on writing short, hard rock songs. It was like sticking it to the weird twee indie rock we’ve been inundated with.” That punk attitude can be heard on the group’s first two full-length albums, Pulling Out Just Enough to Win and Long Weekend, both released in 2008.  The band expanded its horizons on 2010’s Zoo Noises, a free-wheeling, all-encompassing carnival ride, fueled by such intoxicating singles as the percussive “She Said No (I Love You)” and the breakneck hooks of “Bought and Sold”. All three records were written, engineered, recorded and produced by the band with no outside input.

“A lot of folks thought our earlier stuff sounded purposefully under-produced,” says Adrian, but this raw, nervy energy earned the group a lot of attention. The band has racked up positive notices from publications as diverse as Rolling Stone, The New Yorker, Entertainment Weekly and NPR, plus the tastemaker indie-rock blog Popmatters. The band has had success on radio and the licensing front, having been featured on Little Steven’s Underground Garage, Out of the Box with Jonathan Clarke on Q104.3, Matt Pinfield’s The Rock Show on WRXP, MTV’s Jersey Shore,HBO’s Entourage, and the MLB2K11 video game. The band has also been featured on JBTV in Chicago, mtvU and Fox’s Fearless Music, among others.

The band added another member in Lou Jannetty, an old friend of the Perrys’ who showed up on several of the homemade tapes the brothers made in their youth. The band’s new album, Verónica (scheduled for summer 2013 release), is the first album that Lou has been involved with start to finish. The quartet spent two years concentrating on the new record, more time than it has spent on any prior record, with Tony taking the engineering and production reins. “This is our most mature record,” says Adrian, “it’s the culmination of everything we’ve been through and the best distillation of all of our influences to date. It’s a more focused record than Zoo Noises yet is also more adventurous.” Dead Boots are still a rock & roll band at heart but belong to this moment, pulling together elements of the past and present in exciting ways. “Rather than segregating influences, we put them all together. If people listen to the whole album, they’ll get a sense that we can do a lot.”

“Tips the hat to its rock & roll predecessors without feeling trite or at all derivative: — NPR

“Fans of chugging, red-meat rock came out early [to Lollapalooza] for the Boston boys”— Entertainment Weekly

“A fresh take on exactly what made rock great in the first place.”–The Deli Magazine NYC 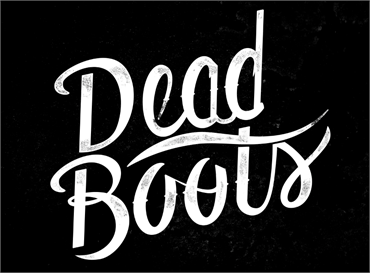