Nahko and Medicine for the People frontman, Nahko, released his first solo and very personal album, on October 20th, titled,  My Name Is Bear. To support it, he announced an expansive United States and European tour. On October 24th, Nahko, backed by his Medicine Tribe and childhood teddy named Britches, graced the stage of Mr. Smalls Theater in Pittsburgh and sent the audience on a journey through the earlier years of his songwriting and self-discovery. “So many dear people helped me to write and live these stories…The two summers I spent in Alaska, half the winter in Louisiana and the other half holed in my van in Portland, and then the first year in Hawaii was transformational and pivotal to shaping me into who I am today. Those 3 years before I met my mother would offer a reclaiming of my name, finding a new faith and fever for my own spiritual connection to Creator, and discovering first love. These were just a few of the important discoveries for a young cub set on exploring the world and finding himself amongst the wild.”

Opening acts included songstress Christina Holmes and Spanish Soul Indie Rock group 1,000 Fuegos. My Name Is Bear is Nahko’s second major release only one year prior, in 2016, Nahko and Medicine for the People dropped their third studio album, HOKA via SideOneDummy Records. HOKA, hit number 72 on the Billboard 200 upon it’s released and was awarded “Record of the Year” by the Native American Music Association.

Katy Perry Teams with Funny Or Die and iHeartMedia to Reveal The Most Natural Way to Rock The Vote on November 8.

Katy Perry gives us the bare truth about this year’s election, urging everyone to get registered and to vote. Katy came to Funny Or Die and Rock the Vote demanding to be naked on camera, so they decided to channel this to urge young voters to get registered – no matter what they’re wearing (or not wearing). Funny Or Die’s wardrobe department was thrilled with the day off, and America was thrilled with the results. Katy is joined in the PSA by comedian Joel McHale and YouTube star iJustine. 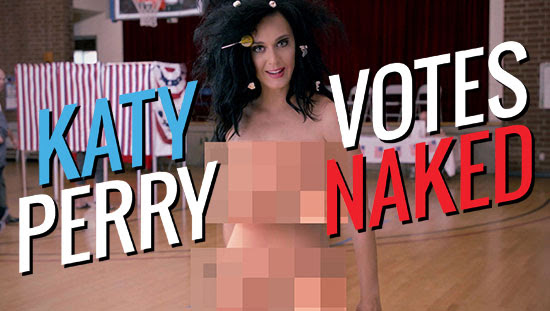 Watch the New Official “Chicken For The Slaves” Live Video and Read a Psycho Las Vegas Preview Interview via VegasSeven.com

The kings of “extra cheesy” metal covers, MAC SABBATH, kick off their summer headline tour today with a performance at the official Psycho Las Vegas pre-party, taking place at the Hard Rock Hotel Paradise Pool stage in Las Vegas. In celebration of today’s tour kick-off,MAC SABBATH manager Mike Odd sat down with Vegas Seven to chat about Psycho Las Vegas, some band history, and more! There, you can also check out a brand new official live video of the band performing “Chicken Of The Slaves”. See it all here:http://vegasseven.com/2016/08/25/mac-sabbath-metal-munchies/
On the Clown Power Tour, MAC SABBATH will be joined by equally mesmerizing one-man, painted Elvis Presley project, Clownvis Presley, originally discovered on Season 5 of America’s Got Talent. The Clown Power Tour will run for about a month, ending in Tucson, AZ at September 17th. See below for a full listing of MAC SABBATH tour dates.
MAC SABBATH Clown Power Tour Dates:
8/25 – Las Vegas, NV @ Hard Rock Hotel – no Clownvis Presley (Psycho Las Vegas)
8/27 – Denver, CO @ Marquis Theatre – no Clownvis Presley
8/28 – Lincoln, NE @ Bourbon Theatre
8/30 – Green Bay, WI @ Lyric Room
8/31 – Detroit, MI @ The Majestic Complex
9/1 – Pittsburgh, PA @ Rex Theater
9/2 – Philadelphia, PA @ Underground Arts
9/3 – Asbury Park, NJ @ House of Independents
9/4 – Rochester, NY @ The Montage Music Hall
9/5 – Burlington, VT @ Club Metronome
9/7 – Silver Spring, MD @ The Fillmore Silver Spring
9/8 – New York, NY @ The Gramercy Theatre
9/9 – Augusta, NJ @ Sussex County Fairgrounds (New Jersey Taco Festival)
9/10 – Northampton, MA @ Pearl Street Ballroom
9/12 – Chicago, IL @ House of Blues
9/13 – Waterloo, IA @ Spicoli’s
9/14 – Lawrence, KS @ Jackpot Music Hall
9/15 – Colorado Springs, CO @ Black Sheep – no Clownvis Presley
9/16 – Albuquerque, NM @ Launchpad – no Clownvis Presley
9/17 – Tucson, AZ @ Club Congress – no Clownvis Presley
Mixing raucous comedy with borderline-horrific theatrics, the only thing more petrifying than impending health problems resulting from years of overeating is a MAC SABBATH show. Show attendees should be prepared to partake in the fun – MAC SABBATH puts on a theatrical, multimedia stage show – complete with a smoking grill, laser-eyed clowns, bouncing burgers and many more magical surprises… basically anything and everything an unwary show-goer could ever want in their wildest dreams.
“… one of the most interesting bands to come around in a long, long time. They have Dead Kennedys’ outrageous sense of humor mixed with total irreverence and ornate style on top of a solid, engaging performance (even if the crowd is reluctant to respond). So while this whole thing was probably thought up after eating too many pot brownies, it is one of the most brilliant ideas in a long time.”­
– Troy Farah, Phoenix New Times
“This is not a drill. Be it exchanging Black Sabbath’s “Paranoid” for a “Pair-a-buns” or “Iron Man” for a “Frying Pan,” these food-focused musical dweebs are cooking up something hot ‘n’ ready just for you.” – Alicia Lutes, MTV.com
“The most impressive-and terrifying-thing about Mac Sabbath is that they’re actually really good. Ronald channels his inner Ozzy onstage, from the manic jumping to the frantic hand waving…” –Bryan Rolli, Paste Magazine
“Even if the songs are dripping with onions and extra cheese, Mac Sabbath put on one righteous stage show, complete with smoke machines, gritty power chords, and endless head-banging.” – Chris Coplan, ConsequenceofSound.net
Named by Buzzfeed as one of the “13 Metal Bands You Didn’t Know How to React To”
Hungry for more? Check out some MAC SABBATH livevideos via YouTube here:
“Frying Pan” – https://youtu.be/m1wkfJY3AZM
“Pair-a-Buns” – https://youtu.be/GiAO2-SH3Wc
Follow MAC SABBATH:
www.facebook.com/macsabbath/
Twitter: @macsabbath
Tumblr: macsabbath
IG: @officialmacsabbath
MAC SABBATH is:
Grimalice – bass
Ronald Osbourne – vocals
The Cat Burglar – drums
Slayer MacCheeze – guitar
Photo by Paul Koudounaris