Philadelphia‘s Beach Slang just celebrated the release of their new album A Loud Bash of Teenage Feelings – out now. Last year, the band released their debut album The Things We Do To Find People Like Us. Beach Slang is performing in Pittsburgh on Oct 22 @ Cattivo.

The band has shared the video for their single “Atom Bomb.” Noisey premiered the bombastic track, calling it “the fastest rager from A Loud Bash of Teenage Feelings.”
Stream “Atom Bomb”
Beach Slang’s second full-length is a crash-and-thunder collection of songs about what it takes to keep yourself going, to make it through the rest of the night-hell, through the rest of your youth-and beyond.  Frontman James Alex wrote much of A Loud Bash Of Teenage Feelings on their first album’s support tour, during which he spent a lot of time with the kids who’d picked up the record.
The band previously shared the song “Punks in Disco Bar”. The video was described byNPR as “…a glimpse into what it’s like to be young, misunderstood and out of place, yet finding belonging in each other. It’s the perfect complement to “Punks In A Disco Bar” and an ode to the motifs and life-affirming mission of Beach Slang.” Watch it HERE.
Nice things said about “Punks in a Disco Bar”;
“The song will certainly be instantly recognizable to fans of the band’s previous work, with the same never-caring, heart-punching, loud-things-loving lyrics and thick Minneapolis-style riffing of Beach Slang’s debut LP – if a touch wearier than last time out.” – Spin
“the heart-on-the-sleeve punks have already become the kind of band that fans rush to get tattooed all over their bodies. Well, those fans had better make room for some new ink…”
– Consequence of Sound
“We need endorphin-heavy, heart-on-sleeve, major-chord, grin-inducing punk rock right now. I mean we need it. There’s a goddamn duty of care: punk has to hold people to account and spit against authority, but sometimes you need to smile like an idiot and let go.” – Noisey
“This new track seeps with feelings of youth and their accompanying frustration. Very punk guitar drowns the entire two minutes and 41 seconds, and the vocals don’t hold anything back. It’s just what you’d expect from a song called “Punks In A Disco Bar,” and that’s not a bad thing.” WXPN 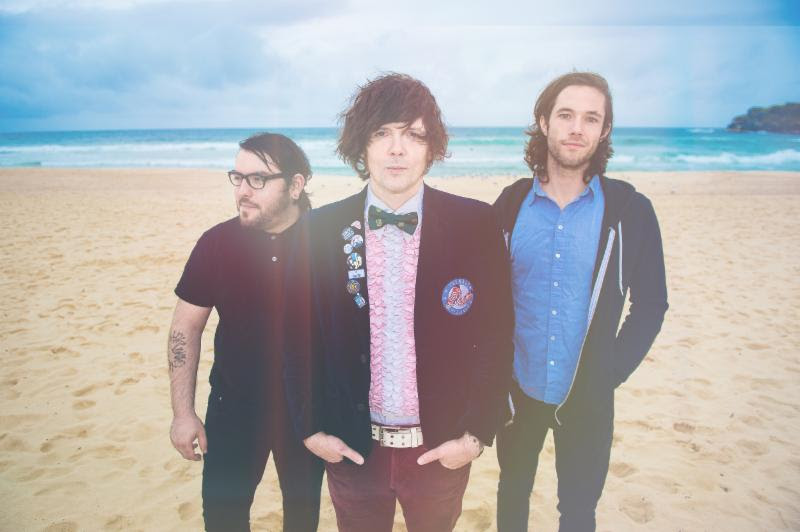 What began as a collaboration between longtime musical partners Gretta Rochelle and Jack Armondo (guitar), became less a means to an end, than the end itself. A deep wellspring of personal and musical experiences shaped their direction, and Chicago’s My Gold Mask is a culmination, a fulfillment, of a long artistic road, that has lead them to their newest effort, Leave Me Midnight, (set for an early 2013 release).

Informed by cinema (particularly Italian Giallo) and galvanized by the dimly-lit warehouse district where their rehearsal space lies, the two thrive in a radiant wash of reverb with a metallic-like symphony mainly comprised of just a nylon string guitar and drums. Tinged with thunderous melodies, theirs is a sound of vision – a recondite vision to be sure, but such is the essence of My Gold Mask.

My Gold Mask began in 2009 with a well received self-titled nine-song debut. While still a band finding itself through experimentation, tracks like “Bitches” and “Your Coo Ka Choo” brought about comparisons to Siouxsie And The Banshees and inspired Big Stereo to say My Gold Mask “create songs that are a delicate balance between 90′s alternative rock gestures and futuristic gypsy tribe shit. But the real magic happens with the versatility of Gretta Rochelle’s vocals…”

In 2010 the band saw the release of two intriguing EPs: A Thousand Voices and A Million Miles (From Where We Were Last) on their own Goldy Tapes label. Lush, aphotic songs like “Violet Eyes” and “Ghost In Your Bed” quickly made their way around the blogosphere leading Pitchfork to pronounce that “…the bottled lightning of ‘Violet Eyes’ makes My Gold Mask a band to watch.” Pretty Much Amazing noted that the band “infuses some heart into the mundane, and makes it beautiful” and The Fader called their unique sound “goth-garage.” Fashion designer Phillip Lim used music from both EPs in his 2010 Fashion Week fashion show and hosted an in-store performance by the band at his Phillip Lim 3.1 SoHo location for his Fashion’s Night Out event. Vogue dubbed it one of “The Ten Best Music Shows on Fashion’s Night Out.” In late 2011/early 2012 “Violet Eyes,” “Ghost In Your Bed,” and “All Up In The Air,” were all separately featured in episodes of the CW network’s uber-popular series, Gossip Girl.

2012 has been spent writing, recording and mixing Leave Me Midnight. Taking a “wall of sound” approach to recording, longtime collaborator and engineer Balthazar de Ley manned the board while My Gold Mask experimented with electronic drums and new sounds, creating a dense, exciting, and occasionally spooky place for their songs to live. They invited well-seasoned producer and engineer Sanford Parker (Nachtmystium, Pelican) to mix the record.

This past season also brought to light a new live show lineup for the band. Gretta has stepped out from her full-time duties behind the drumkit to enjoy the role of front woman, making room for dynamic drummer, James Andrew, to take the stage with My Gold Mask. Andrew also played drums on four of the new album’s tracks.

Meanwhile Jack continues to explore new ways of making guitars sound otherworldly: “Guitar is usually associated with rock music, but in writing this album I thought a lot about synth-based sounds, like on Black Celebration by Depeche Mode. I’m not really concerned with my guitar sounding like a guitar, per se. I’m constantly tweaking its sound,” says Armondo. This type of sonic experimentation gives My Gold Mask a unique approach to pop music that can be hard to pin down, but this adaptability came in handy when asked to collaborate with The Hood Internet on “Do You Give Up Now?” a track featured on their latest album FEAT released in 2012.

With a sound that has crossed so many musical spectrums and their ability to deliver a powerful and engaging live show, My Gold Mask have shared the stage with such varied acts as Twin Shadow, Wavves, The New Pornographers, Japandroids, The Rapture, Blonde Redhead and Zambri, to name a few.

Eager to continue the artistic evolution of the band; Jack and Gretta are back to writing before they head out on tour in support of Leave Me Midnight.