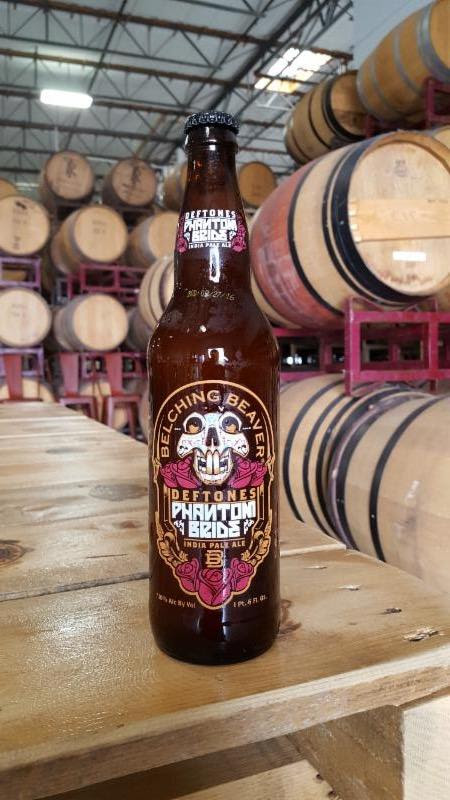 September 29th, 2016 – (Burbank, CA) – Deftones have announced that they have partnered with San Diego’sBelching Beaver Brewery to create a new beer called Phantom Bride IPA – a hoppy West Coast style India Pale Ale loaded up with Mosaic, Amarillo, Simcoe, and Citra hops, all handpicked by Deftones frontman,Chino Moreno.
“Really excited to see our Phantom Bride IPA hit the shelves. As a huge beer connoisseur it was a privilege collaborating with Belching Beaver on the flavor profiles and coming out with a beer that I would put right up with any of my favorites. Good stuff!” –Chino.
The beer ships from the brewery to distribution outlets in Washington, Oregon, Nevada, Hawaii, and California today and will be available to retailers and consumers where all great craft beer is sold, including BevMo!, on October 3rd. Phantom Bride IPA will be available on draft and in 22-oz. bottles. It is brewed and bottled by Belching Beaver Brewery, Vista or Oceanside, California. San Diego County.
The beer is named after the multiplatinum, Grammy Award-winning alt-rock band’s latest single “Phantom Bride,” from their current album Gore, which is currently Top 10 at Rock Radio.
Lucky fans in the Fullerton, CA area will get a chance to taste the Phantom Bride IPA on tap for a limited time at a special kick-off event 10/5 starting at 8pm!
When: October 5th
Where: Slidebar
122 E Commonwealth Ave
Fullerton, CA 92832
Time: 8pm
*band not present
Deftones is vocalist/guitarist Chino Moreno, guitarist Stephen Carpenter, keyboardist/samplist Frank Delgado, drummer Abe Cunningham and bassist Sergio Vega.