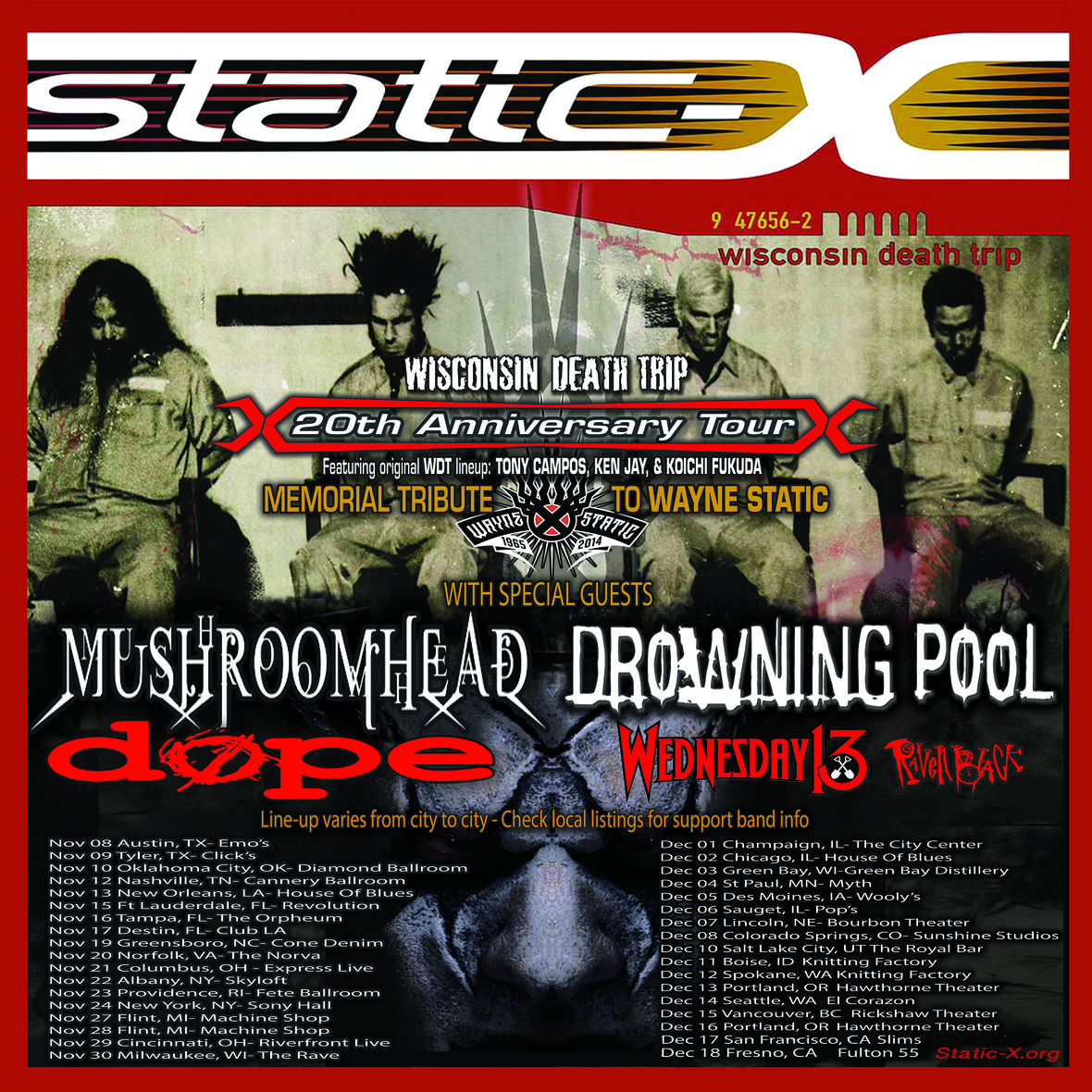 In wake of the recent news that DevilDriver front man Dez Fafaras wife, Anastasia Fafara, has been diagnosed with cancer, Devildriver has been forced to withdraw from the tour, so that Dez may remain home to care for her and his family.

Static-X sends the Fafara family our prayers and support.

Drowning Pool and Musroomhead will now appear on select dates, while Dope, Wednesday 13, and Raven Black will remain part of the tour as originally scheduled.

My wife has been diagnosed with cancer .

I will be staying home to care for her and be by her side every minute as she begins her Cancer fight with surgery and further treatments .

Apologies to all but I’m sure you all understand that family comes before work.

We thank you for all your well wishes at this time .”

Static x recently announced the official release date for their new album project regeneration. A teaser for the new song hollow can be seen here. 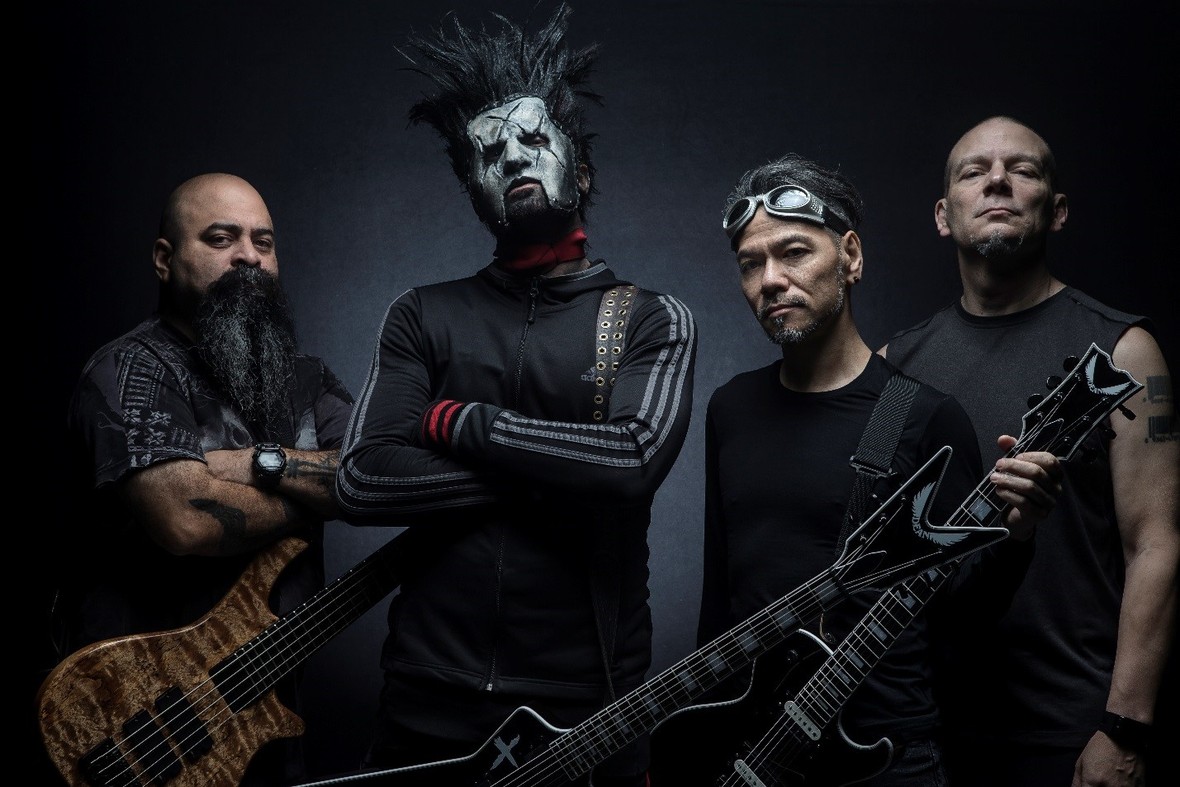 Warped Tour Bands Tell You How Much Your Money’s Worth

For every $2 spent on KAB’s Traveling Education Booth program, KAB has the opportunity to educate 10 young people on breast cancer prevention.

If interested in sharing what some of the hottest acts on the Vans Warped Tour had to say when asked – “What can you do with $2?” but more importantly, “What impact can your $2 have?” please visit our site here for an EXCLUSIVE VIDEO:  http://bit.ly/KABG2E10

About The Keep A Breast Foundation:

Bowling for Boobies® is a fundraising event to help provide financial assistance to local women who are experiencing financial challenges as the result of fighting and living with breast cancer.

You don’t have to be a good bowler in order to participate.
All you really need is a little enthusiasm and the desire to raise money for our important cause! Check out more info. here:

On October 20th, UK progressive tech metallers MONUMENTS will sell the previously unreleased track “Memoirs” as a special single to raise money for the treatment of a close friend of the band who has recently been diagnosed with an extremely rare form of cancer.

Pseudomyxoma Peritonei (or PMP) is a cancer of the appendix and is so rare that it can only be treated by a small number of specialists, none of whom are in the UK. Treatment must be sought internationally, and the costs are likely to exceed tens of thousands of pounds.

MONUMENTS’ Adam Swan (bass) explains: “Hi everyone! We will be releasing ‘Memoirs’ via Bandcamp as of October 20th. All proceeds will be going to our good friend Laura, who recently found out she has a condition called Pseudomyxoma Peritonei (or PMP), a rare form of cancer of the appendix that affects less than one in a million people. We will be releasing ‘Memoirs’ to raise money for her as there are very few people in the world who are able to treat this condition and none are in the UK due to its rarity. She will have to travel abroad for the treatment and it will be extremely expensive. There will be a minimum donation of £2 for the track, however it’ll be possible to give as much as you want, so please give generously. We would like to give a big shout out to Neema Askari, Joe Garret, John Sprich, James Monteith, Mel Schmidt, Steve Joh and everyone at Century Media for making this possible so quickly. Thank you.”

Check out the “Memoirs” trailer here:

The band would also like to raise awareness about this condition as it is often misdiagnosed due to its extreme rarity. For further information about PMP, please read below:

“Memoirs” will be available for purchase on CD starting the first day of the Euroblast tour at all the shows, and it can be digitally downloaded via the band’s Bandcamp on October 20th.

MONUMENTS will be touring in support of their recently released debut full-length album, Gnosis. With its groovy, melodic ambience, Gnosis packs a progressive punch, which is further strengthened by the addition of Matt Rose’s broad vocal spectrum to the band. For a preview of the album, fans can listen to the previously released tracks “Degenerate” and “Doxa” online. A video for the track “97% Static” can also be viewed here:

To purchase Gnosis, please head over to iTunes for a digital copy or CM Distro for the album, plus a special CD/t-shirt bundle. Read on for a few reviews of MONUMENTS’ Gnosis:

“With ‘Gnosis’ MONUMENTS have delivered a stunning opening salvo onto the world, delivering not only one of the best debut albums I’ve heard in sometime, but also one of the best albums of 2012…” — THIS IS NOT A SCENE.com

“‘Gnosis’ is one of the best albums in the djent genre I heard so far this year.” — ABOUT.com

“‘Gnosis’ not only grooves for days, but has enough substance to keep listeners coming back for more.” — HEAVY BLOG IS HEAVY.com