The Tour Will Hit More Than 60 Cities From April To June
January 10, 2018
(Los Angeles, CA) Tech N9ne is announcing his Tech N9ne’s Planet Tour 2018. Scheduled to run April 17, 2018 through June 23, 2018, Tech N9ne’s Planet Tour 2018 will stop at more than 60 cities and will also feature Krizz Kaliko, Just Juice, Joey Cool and King Iso.
The trek is set to launch April 17 in Cedar Rapids, Iowa and conclude June 23 in Denver, Colorado. Other notable dates on the tour include two nights in Seattle (April 27 and 29), a May 10 appearance in Los Angeles, the May 20 stop in Houston and a May 25performance in Atlanta. For VIP fan club packages, the up-to-date tour itinerary and additional information about the Tech N9ne’s Planet Tour 2018, visit strangevip.com.
Tech N9ne’s Planet Tour 2018 is named after Tech N9ne’s forthcoming Planet album, which is set for a March 2, 2018 release. Mackenzie Nicole, Krizz Kaliko, Darrien Safron and Joey Cool are among the guests on the project, which features such songs as “Tech N9ne (Don’t Nobody Want None),” “Levitation” and “We Won’t Go Quietly.”
With 2018 just underway, Tech N9ne is carrying the momentum he generated in 2017 into the New Year. In 2017, Tech N9ne released two Collabos projects. In April, Dominion arrived in stores. Strange Reign was released in October and inspired the name of Tech N9ne’s Strange Reign Tour 2017, a tour that included stops in the United States and Canada in September and October.
Tech N9ne also joined an exclusive music industry circle in June 2017. That’s when the Kansas City rapper’s “Caribou Lou” single surpassed the 1 million copies sold mark, according to the RIAA (Recording Industry Association of America). It was Tech N9ne’s first platinum plaque, putting him in rarefied air, especially for an independent artist.
Tech N9ne’s Planet Tour 2018 Dates: 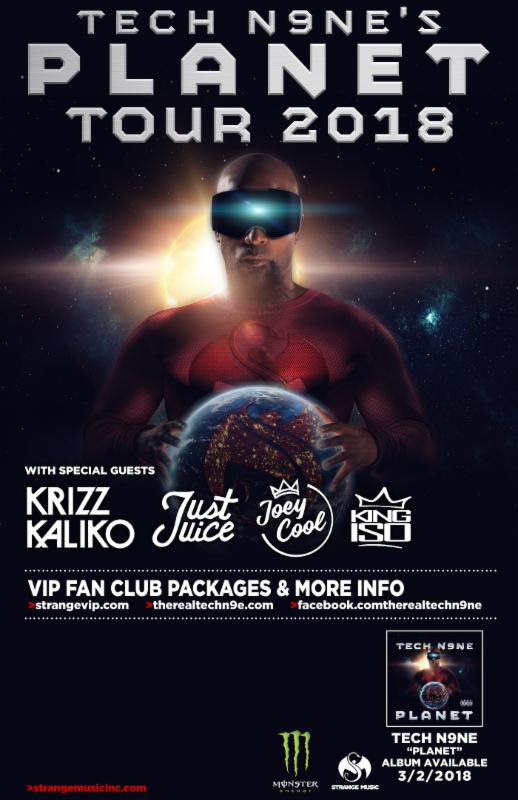 According to Loudwire.com there was a freak fire in Ozzy Osbourne’s home this morning (1.17.13). The accident has left the Oz “with singed hair, no eyebrows, minor burns to his face and a setback to an existing hand injury”.

“Firefighters were called to the Osbournes’ Beverly Hills home at around 4:45 AM this morning to extinguish a fire caused by a candle which had not been blown out before the husband and wife retired to bed. The candle was housed in a glass vase that reportedly exploded, causing a small fire in the Osbourne’s living room. Sharon and Ozzy, who had undergone hand surgery the day before, attempted to put out the flames, but their efforts resulted in minor injuries to the Black Sabbath vocalist.

Ozzy attempted to put out the fire with his hand still in the cast from his surgery as Sharon got some water and unintentionally caused the oily fire to spread as she splashed the flames. The resulting blast of fire burned Ozzy’s long hair up to his ears, seared off his eyebrows and left his cheeks skinned. Luckily, Sharon and the Osbourne’s many pets suffered no injuries.

Sharon described the incident with intricate detail on her show ‘The Talk’ today [via Contact Music]:

At five o’ clock (in the morning), I heard a noise like metal had fallen. I thought it was my housekeeper coming in and she had dropped her keys on the tiles, that’s what it sounded like, so I didn’t pay any attention. A few minutes later, my eyes are stinging and my throat’s closing up, (I thought), ‘Something’s weird smelling in here’.

Then my dog started to bark. I go downstairs and the whole living room (was on fire). The candle had burst and the cracking sound was the glass and the candle exploding…

My husband had an operation on his hand yesterday so he’s in a complete cast… He comes down and goes, ‘Oh, the fire, the fire!’ (and tries to put it out) with his hand in the cast. Then he opens the French doors and I go into the kitchen and throw water on it and it erupted…

Ozzy’s front of his hair from (his ear down is), gone! His eyebrows (are gone)… he’s got like, skinned cheeks. We are, like, two idiots, it was like The Three Stooges… Everything you are not meant to do – go to bed with candles alight, open the doors and put water on – we did it all.

They (the firemen) come up, they give us a lecture, and Ozzy’s like, ‘She’s been doing this to me for 32 years! You tell her, you tell her, no more candles!’

I apologize to my husband because he put himself out. He made his hand worse, it started to bleed, the whole nine yards, and I’m sorry and I love you and I will never light a candle again…

I want to thank the firemen from Beverly Hills Fire Station because you are magnificent there and I want to say to everyone out there, please, please check your candles before you go to bed.

We hear at PMM wish Ozzy a quick and speedy recovery!!!