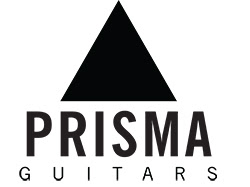 Real Guitars Made from Real Skateboards 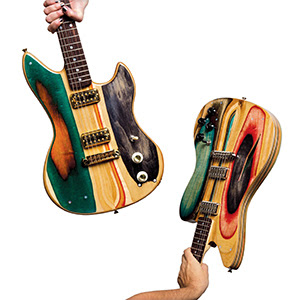 SAN FRANCISCO —What started as a love for two hobbies is evolving into a passion for one business. Today, Prisma Guitars is driven by the goal of building custom guitars with a one-of-a-kind style where instruments are all 100% handcrafted from the wood of recycled skateboard decks and custom engineered for the highest quality sound.

Prisma offers musicians the opportunity to customize every feature in building their dream guitar, from body shapes and pickups to necks, bridges, and knobs. Prisma electric guitars have six body shapes that can be built entirely with skateboards, a skateboard top and mahogany or alder back, or with a hollow body. In addition to using their own stock of skateboards, Prisma is able to build a guitar with a customer’s skateboards at no extra charge.

Necks are available in multiple profiles in four styles: skateboard, mahogany or maple with rosewood fingerboard, or one-piece maple. Each neck has a 12’’ inch radius and 25.5’’ scale length with a hand-shaped Graph Tech nut at 1 5/8’’ width. Prisma uses only hand-wound pickups from McNelly Pickups and David Allen Pickups, and all guitars are built exclusively with Emerson Custom electronics. Tone Pro or Mastery bridges are available, and an Allen key Hot Rod truss rod anchors the body, which has a 100% nitrocellulose instrument lacquer finish. 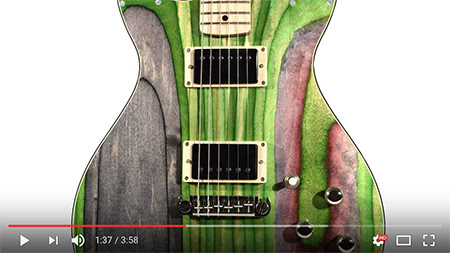 Pricing for custom guitars begins at $2,500 and orders take approximately eight to twelve weeks to complete. Left-handed models are available at no extra cost, and all instruments come with a travel-ready MONO bag. Guitars can be shipped internationally.

Tapping into local SF culture, Prisma also offers pre-built series guitars with select customizable features. The Sunset Series pays homage to Prisma’s Sunset District neighborhood, home to Ocean Beach, where surfing and skateboarding are a way of life. Each guitar in this series is a vibrant pastel that is meant to represent a house in the neighborhood. Loaded with McNelly x Prisma pickups, the series features handmade skateboard knobs and a custom Decoboom pickguard inspired by 1970s surf culture.

“Skateboards are made with seven layers of hard rock maple— a familiar guitar wood— and some of the layers are randomly dyed colors. Through working the materials, we get the colors to come through,” says Nick Pourfard, founder of Prisma Guitars. “Every single time I build one, it’s a different result. I never make the same guitar twice.”

For a behind-the-scenes look at the Prisma design process, check out this video that features a demo by professional skateboarder and musician Tommy Guerrero. To learn more about custom Prisma Guitars, visit www.PrismaGuitars.com.

Prisma Guitars was founded in 2015 by 24-year-old Nick Pourfard, a self-taught woodworker and industrial design student based in San Francisco. Inspired by his love of skateboarding and music, Nick decided to combine the two to create colorful guitars using broken and used skateboard decks. He has created custom guitars for stylistically diverse musicians at home and abroad, including international icon Steve Harris of the band Iron Maiden. Prisma Guitars are all 100% handmade in the USA, and the colors are completely one-of-a-kind for every build. To learn more, visitwww.PrismaGuitars.com.

Barrage 8 is the latest project from John Crozman, Dean Marshall and Tony Moore, the original creators of the hit show Barrage. Utilizing the same energy, panache and innovative stage performance that Barrage was known for, Barrage 8 features all the instruments in the modern string family. The “8” in the name represents a re-imagining of the string octet: 5 violins, viola, cello and double bass. This instrumentation drives a rich and powerful sonic palette that further explores the musical diversity in the Barrage 8 compositions and arrangements. Barrage 8 presents what the Barrage name has come to represent worldwide:

“a memorable presentation of music, from many genres and cascading generations, delivered in a way not seen or heard before.”

Chartiers Valley Middle School and High School Orchestra will be performing with the musicians of Barrage 8 on Tuesday, October 25, 2016 at the Intermediate School at7pm.