Heading out to cover and photograph Rusted Root this past Friday was more than an adventure.  It was more of a goal and vision. Keep in mind, this review is not meant to be about me at all. But my health recently took a turn for the worse having been diagnosed with skin cancer.  The date on the calendar that was circled for my surgery was June 22nd. The next date circled and marked was June 23rd. The night I was going to cover and photograph a band I have always liked and felt a “powerful” feeling to over the years. That band is Rusted Root. And the band also promised to perform some new material for the first time ever. So, I was even more excited and had more urgency to get to the show. Rusted Root is a brand that I feel I kind of got to hear developed back in the years 1986-1989 while hanging out with lead singer Michael Glabicki and Jenn Wertz in high school. Hearing the two of them sing with Mike playing his guitar have always been powerful and great memories to me.

Fast forward to this past Thursday, with half my face bandaged and swollen from my surgery, I felt the need to get to the Root show and see and hear Mike and his bandmates play their rhythmic, tribal and powerful hymns to help me heal and more so “feel good”. And it worked!! For those two hours, I felt like everyone else and my pain truly disappeared. I also never once felt the big bandages that covered half my face.  For that, I thank this great group of musicians and individuals.

With THAT out of the way. Rusted Root once again OUT performed themselves the last time I shot them. Having just seen them back in early April at Jergal’s Rhythm House in the northern suburbs of Pittsburgh, I had an idea what tonight’s show was going to be like. But boy was I wrong. Tonight’s show at Pittsburgh Station Square was truly a completely different show. The setlist was different, the atmosphere was different and the melodies that tie their songs from one to the other were different too. I can never keep count, but tonight Root’s Liz Berlin played like 309 different instruments. Sometimes two or three at the same time. Her ability to do this amazes me more and more each show I see Rusted Root. Vocals are not up for discussion. Her vocals are tops amongst female vocalists. She is like a chameleon. She can sing and harmonize with anyone doing anything.

Michael and his bands mates hit the stage exactly at 9 pm to a huge crowd outside in the steady rain at Pittsburgh’s Station Square.  The rain held off till the band decided to hit the stage and then it baptized everyone there from start to finish. The opening song ironically was Rain. An incredible song and one that truly set the tone for the damp night. It however in no way made the crowd even think about heading for shelter. I think it may have been a sign for more onlookers to come join the Root Party just starting. The transition from Rain into VooDoo was great and unexpected. I never expected VooDoo early in the show but it was a nice change. Man, Not Machine followed and was as always powerful. The lyrics and music give me chills every time.  And like I said earlier, at this point Liz Berlin had used around 15 instruments to add to the already great melodies of the show. In reality, Liz had only used about 4 so far, but you get my point. She can do anything on a stage. And then some.

Glabicki and his bandmates blew through their set list keeping up with the increasing crowd size and continuing rain.  Glabicki’s vocals were unbelievably strong tonight. Rested strong. No strain or crackling at all. This would be the first show for Rusted Root on their latest mini-tour taking them through August.  Heading into the end of the show and subsequent three encores, Root played one of the band’s anthems and crowd favs X T C. In the ending part of the song following the last chorus, Mike’s vocals sounding like a steam engine coming back into the station at Pittsburgh’s Station Square. He left zero notes on the stage so to say closing out the set. X T C was a great ending for the show and really set up what would be a great three song encore. Before X T C, Root ran through more crowd favorites such a Monkey Pants and David Bowie’s Rebel, Rebel, a Root regular lately on their set list history.

Glabicki came out for a solo moment to kick off their encores that transitioned into Scattered which showed just how truly gifted Glabicki is on this guitar. Fast and so smooth. So very rhythmic and soulful. The rest of his band mates joined Glabicki for another crowd favorite; Send Me On My Way, a song that put Rusted Root on the map both nationally and internationally back in the early 1990’s. Glabicki fed off the crowd’s energy for the song and vice versa for the crowd off Glabicki. Berlin’s vocals were awesome too on Send Me. The other highlight of the song was guitarist Dirk Miler providing the flute end and obviously very important part of the band’s anthem. A really great way to wind down for the night. Closing out the night, was the powerful Back To The Earth. What can you say? Yet another feather in the band’s cap and for me the third or fourth exclamation mark for tonight’s concert.

The show tonight was as always great. I enjoy getting out to shoot Rusted Root and talk to Mike however short or long it may be.  The band sounds like they have some more new material to play and possibly release down the road. Two possibilities that any Root faithful should be happy to hear. Root plays June 30th in Portage County Ohio and in Sherman New York to kick off July.  The band will play the Red Rock’s in Colorado for the 4th of July. That’s a show I would not want to miss.

As Rolling Stone put it, “Mastodon are the greatest metal band of their generation- no one else comes close.”

Mastodon will be coming to Pittsburgh in support of new effort, Emperor of Sand, another brutal piece of perfection from what many people call the Pink Floyd of metal.  With complex layers, fluid time changes, three vocalists, and musicians of the highest caliber, Mastodon have proved themselves head and shoulders above their counterparts.

If you have never had the pleasure of witnessing Mastodon live, now is the time.  The band put on a performance that is hard to match.  Pinpoint precision marks every note while retaining the ability to improvise as well.  The band is really becoming a fine wine, just getting better with age.  The new album has much to do with the handling of tough situations and making something beautiful out of it.  For a sweet little taste of their amazing live performance, check out this clip from Jimmy Kimmel Live!

Also, the band has put together a very cool series of the making of Emporer of Sand, Start here for Part One:

An extra special treat will be the inclusion of openers Eagles of Death Metal.  Many people have only come to know the band due to the tragic events in Paris’ Bataclan Club, but many others came to discover them being fans of Josh Homme of Queens of the Stone Age.  While Homme rarely tours with the band, frontman Jesse Hughes is a show all by himself.  If you dig great rock n roll that you can shake your booty to (read bring your chicas!), then this is a must.  Check out the documentary Eagles of Death Metal: Nos Amis (Our Friends) on HBO, it is really is an insightful piece and very touching.

Russian Circles have come to Pittsburgh a handful of times and have never disappointed.  The band out of Chicago have slowly built a rep since 2006 for dark, introspective, and intense music.  Highly underrated and definitely a killer band to those in the know, Russian Circles will put a dent in your consciousness that will not leave easily.

You owe it to yourself to come to this show of three very distinct sounding bands that are truly impressive live.  Get tickets here: http://promowestlive.com/events/2056

“…a strange and heady brew of psychedelia, Krautrock, Gang Gang Dance-style electro experimentation and, perhaps most strangely of all, take on late 80s British indie-dance.” –The Line of Best Fit 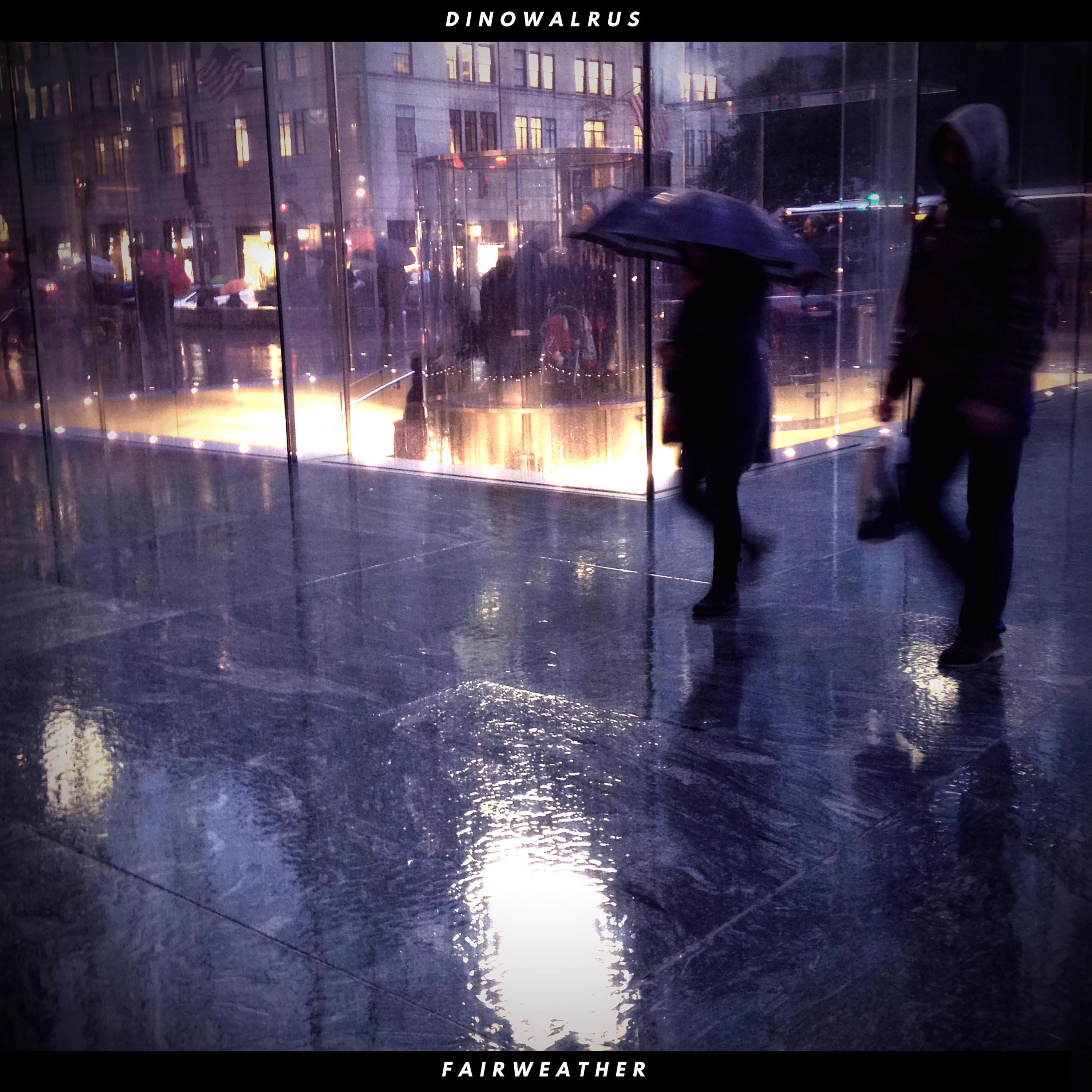 Brooklyn DIY genre-benders Dinowalrus have unleashed the second track from their upcoming LP: the synth-psych-gaze “Light Rain” is now streaming exclusively via new siteCLRVYNT, along with an in-depth feature on frontman Pete Feigenbaum’s take on physical media as a recording artist.

The track is featured on their upcoming studio album, FAIRWEATHER, a spacey exploration of vivid sonic vivacity, due September 23. The track is driven by a pulsing krautrock beat and, like much of the album, could be described as the sonic and lyrical equivalent of a light spectacle – “Life rushes by when I stand still,” sings Pete Feigenbaum. Along with flowing synths and electronic beats, it also harkens back to classic rock n’ roll as it ends with a driving guitar solo.

Although heavily dosed with electronics, FAIRWEATHER contrasts the dystopian industrial arpeggiators of their previous albums with a warm, timeless palette of organs, looped breakbeats, and radio-ready vocals, including the occasional psychedelic flourish of reversed guitars and exploding delay trails. As a result, the music moves forward by looking back, bringing to mind the work of contemporaries like Jagwar Ma, Tame Impala, andDeerhunter, while also incorporating some of the more exciting and psychedelic pop sounds of the early ’90s Creation Records back catalog with aesthetic nods to The House of Love, Primal Scream, and Ride.

Dinowalrus will be playing a hometown release show at Rough Trade NYC on September 25 (tickets available here). The band will be joined by Sharkmuffin, Dead Leaf Echo, and Drawing Boards.

Three years following their last studio release LACRIMOSA is back with their 11th studio album Revolution which will be released tomorrow in North America via End of the Light Records. This album will not only captivate listeners with its thematic elements, it also features a stellar guest lineup. Next to choirs and orchestras the band recorded their new album with Mille Petrozza mastermind of the thrash metal pioneers KREATOR and on drums Stefan Schwarzmann, from ACCEPT.

Today AOL Music is streaming Revolution in its entirety as part of their full album listening party series HERE. Be sure to check out Revolution and then order your copy on Amazon.

LACRIMOSA was established in November 1990 as an alternative band featuring rock music with poetical lyrics, mixed with classical influences. For over 20 years now the band has garnered a reputation as pioneers for several music styles including German Alternative and Symphonic-Metal.

As the first independent band with German lyrics LACRIMOSA visited Mexico back in 1998, followed by South America, Russia and China. At the present time LACRIMOSA tour all over the world. They have worked with the world famous London Symphony Orchesta, recorded at the legendary Abbey Road Studios, and have topped the charts in over 25 countries worldwide.